RITCHIE FERNANDEZ (left and @Ritchiee1 on Instagram) and KAIL (right) were skating their hearts out at DOWNTOWN SKATEPARK in Vancouver this morning.

Ritchie was fun, open, and great to interview!

Kail told me he was feeling the effects of jet lag, so it was really nice of him to let me interview him.

I asked RITCHIE FERNANDEZ (Instagram: @Ritchiee1) and KAIL (just in from Queensland, Australia) if they could answer a question that is very near-and-dear to me:

HAVE YOU EVER FELT LIKE A LOSER/A FREAK/OR AN OUTCAST? IF SO, WHAT HELPED YOU THROUGH IT?

Here are their answers (and I greatly appreciate them letting me film them, because other skaters were camera-shy, or said they had never experienced feeling this way and therefore didn’t have an answer…Kail said he thinks everyone has felt this way at some point, and I have to say that I agree):

Sunny day, sweepin’ the clouds away

Science World, I see you!

Vancouver is a special place to be.

Fuel up on yummy food…then do what you love!

EMILY GRAY comes from the Sunshine Coast, but now calls Vancouver home. If you have seen the mural on the side of Kea Foods at 10th and Main, then you know her work. Emily is incredibly talented and dedicated to her craft (a.k.a. a hard-worker).

Go to www.EMILYGRAY.ca or @EMILYGRAYART (Instagram) to see more of her work online. A mural that Emily has already finished will be going up once Skytrain Reno arrives at Commercial and Broadway…watch for it!

In an e-mail Emily sent me after our interview earlier today she wrote that she loves “community engaged art, I believe thats what public art should be about! Let’s all get together and have a good time, express ourselves, and encourage each other to just keep improving in art and life :)”.

Go to EMILYGRAY.CA or @EMILYGRAYART (Instagram) to view her work!

I am so on-board with Ms. Gray’s sentiments about the connection between art, community, and loving life. Today we visited one of Emily’s murals, SPYGLASS, that was completed with the help of around 100 other participants (who used colourful paint to finish the drawings/outlines Emily made). SPYGLASS is located under and beside the Cambie Street Bridge and was inspired by other artists’ (RHONDA WEPPLER and TREVOR MAHOVSKY) work that is done around the base of the Cambie Street Bridge.

The following video is a TIME LAPSE of SPYGLASS being created:

I interviewed EMILY GRAY to learn more about her relationship with art, and our conversation was informative and fun! I am most impressed (beyond the art itself) by Emily’s dedication to building a stronger sense of community, both for herself and others, through working on PUBLIC ART pieces that many help to create and enjoy.

Morning workout made all the more beautiful thanks to public art!

Last night myself and some friends were at GUYS AND DOLLS on Main Street (no cover and candy is sold!), THE SAVOY on East Hastings (no cover), and at the second anniversary of ARTS SIGNIFIED held at Studio East that had over 50 live bands over the course of Friday and Saturday (cover $5). Perfect for a cheapskate like me. Interesting people and good music!

The Savoy Pub on East Hastings was our next spot…

The Savoy Pub had a live band…no cover (yay)…but sadly also no club soda for a non-drinker like me. Great service though!

The crowd went nuts for this band

This drummer killed it

Johnny de Courcy…I saw him open for The Preatures at Electric Owl and his theatrics were incredible and his performance was amazing.

Tonight I went on a solo-trip to the movies and I was not disappointed. I watched director BENNETT MILLER‘s film (Miller also directed MONEYBALL and CAPOTE) FOXCATCHER. The film was painful, and it was a lot to take in, but it reminds me of how important (and healthy) it is for vulnerable emotions to be expressed (at the appropriate time and place) instead of held in. Nobody can be tough and all-powerful, and when we try to be the consequences are horrible.

If you do yourself a favour and go view this film, I think you will have the privilege of seeing a TRUE STORY represented on the big screen that proves masculine standards in our society, and the idea that being vulnerable is always a weakness, can destroy lives.

STEVE CARELL perfectly captures the pain of a person who cannot be open and vulnerable with other people: source.

CHANNING TATUM is touching, real, and outstanding playing real-life GOLD MEDAL WINNER for wrestling at the 1984 Olympics MARK SCHULTZ. MARK RUFFALO plays SCHULTZ‘s older brother DAVE (also a gold medal winner at the Olympics for wrestling in real-life). JOHN DU PONT is a power-hungry, jealous, bitter, and deeply sad individual who is played by STEVE CARELL. The end of this story in real-life is depressing beyond belief, and I don’t want to give away too much about the film. Nevertheless, I was totally sucked-in to seeing how the events unfold (I already knew what happened in real-life before seeing it) because the performances are done with such a sense of humanity and sense of respect for the individuals TATUM, RUFFALO, and CARELL are playing.

As much as Carell plays an unattractive individual who is mentally unstable and abusive, I could still see where the character was coming from and that is not an easy feat consider how much of a “villain” Du Pont could be considered to be.

I already know that Steve Carell can convey the underlying lack of confidence that drives people to be unlikable characters, but here he takes this to another level. The ACADEMY AWARD NOMINATIONS are being announced on January 15th, and I hope Carell is given a Best Actor nomination. The way he plays the character showed me, yet again, that confidence and loving oneself is the first step necessary before you can create healthy and positive relationships with other people.

I am a female and therefore I often focus on the oppression of women (and having studied Women’s Studies for my B.A. might also have something to do with my female-centred focus). Watching FOXCATCHER made me thankful to be a female, because as an Olympian-wrestler Mark Schultz does not have much room to express his feelings. He needs to work on improving his fitness and what is going on in the inside is mostly irrelevant.

Ruffalo’s portrayal of Mark’s brother Dave is inspiring. Ruffalo as Dave Schultz shows that men can be strong, masculine, and athletic while still caring about other people and how they feel. Dave Schultz focuses on trying to help his brother express himself. He tries to provide Mark with positive love and affection, but this is hard for Mark to receive as he doesn’t seem to have much love for himself. The relationship between the two brothers is beautiful. The relationship between John du Pont and Mark Schultz is horrific and reminds me of how horrible it is to be under another’s power and to feel helpless to resist against abuse because you think you need their support. 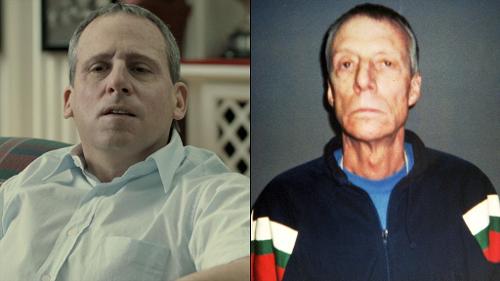 Mark Schultz has already won a gold medal at the Olympics when he is contacted out-of-the-blue by rich benefactor John du Pont. John du Pont is one of those people I would totally be creeped-out by and would try to avoid. Mark needs funding to train to his best abilities and he does not have his parents in his life, so he is flattered by du Pont’s attention and du Pont’s belief in his potential.

Mark Schultz leaves where he trains with his brother Dave as his couch, and moves onto the isolated compound that du Pont resides on with his aging mother, JEAN DU PONT (played by VANESSA REDGRAVE). Mark thinks he has hit the jackpot when he is given his own large home to live in on the property, and the wrestling training facility also at the Foxcatcher compound is state-of-the-art.

Mark thinks he’s got it made, but as these stories go on the big screen and in real-life, there are always strings attached. Some people are genuinely giving and do not expect anything in return, but when things seem too good to be true they probably are.

Gradually Mark begins to experience the negative downsides of being completely reliant on du Pont and under his tutelage, but he feels he is already in too deep to get out. The real-life Mark Schultz is currently claiming the film defames him because of one scene in particular that insinuates that there was a component of sexual abuse between du Pont and Schultz. I think that this seems entirely plausible given the real-life details of the story, but maybe the filmmaker is unfair to extend the facts to include this representation of the degree to which du Pont abused Mark Schultz.

It is interesting that the real-life Mark Schultz is so offended by this, because it might be a reflection of how hard it is for him to come to terms with the abuse that took place and he might feel shame that this man did take advantage of him sexually because there is still so much stigma surrounding men and sexual abuse. It is also possible that there was no sexual abuse and that is the reason he is bothered by this part of the movie, but either way, it draws attention to the stigmatization surrounding men, and in particular men in sports, who experience sexual abuse at the hands of their mentors and coaches. So many people still possess the idea deep-down that any man who gets sexually abused was “asking for it”. I think this mentality is disturbing, but I also believe it is still prevalent in our culture.

WHY IS THIS FILM HOPEFUL? I have mostly written about the darkness in FOXCATCHER. But, I left the film feeling hopeful. That is because it re-confirmed to me why I feel it is so important for me (and others) to work towards being honest and sharing with others what is going on in our inner-worlds. I think when you try to repress the hurt you have, and the rejection you have experienced at the hands of your parents or others in your childhood, it remains inside of you and influences what you do and how you treat others. I am proud to say that I go to a counsellor to help deal with the pain I still have inside of me, and to work on improving my own self-confidence and as a bi-product of that, my relationship with others.

Bottling up your emotions never works: eventually those emotions are going to burst, it is just a matter of WHEN and more importantly HOW.

Foxcatcher shows that if you do not attend to your own needs and deal with your painful past, then you might end up destroying yourself or the people closest to you. FOXCATCHER is tough to watch, but so very worth it!