I asked Josh the usual questions on Main Street in Vancouver today, and I was very entertained by his responses. I love it when people speak the truth, even if it involves them being vulnerable in order to do so. Josh definitely opened-up in a hilarious and honest way.

When I asked, “If you’ve ever felt like a freak or an outsider, what helped you through it?” His answer was, “Huh…I don’t know that I’m through it.“ 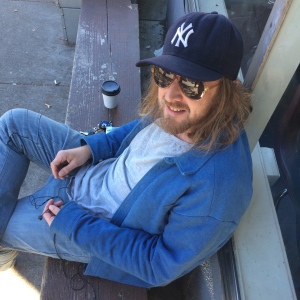 I love that answer! I also often still feel like a freak or an outsider, and while that feeling is not permanent,  I don’t know if I’ll ever stop feeling awkward and weird some of the time.

Josh then went on to say, “I think that you can go in and out of stages of comfortability, you know, but I think that what gets me out of anything is just sort of the knowledge that I’m going to be OK. You know I like just sort of look at my past and figure out, have I got through shit before? And it’s like, yeah. Am I gong to get through this next shit? Yeah.“