Words of Wisdom from ISABELLA MANFREDI about how to survive bullying at school: “It’s where, if you can make it past 18, if you can graduate from high school, it will never be that hard again. EVER!” 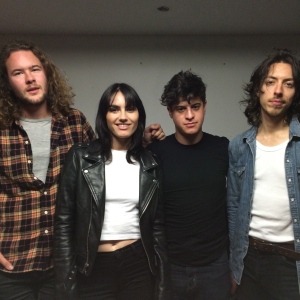 THE PREATURES rule! This quintet originates from Sydney, Australia and they first formed in 2010.

They are undoubtedly a full-fledged rock band. While I’m not the biggest rock fan in general, I’m a fan of this band because they write catchy, melodic songs that make me wanna jump around! Also lead singer ISABELLA MANFREDI‘s voice can show vulnerability and incredible power from one note to the next.

I saw the band perform live at Electric Owl on Main Street in Vancouver tonight (October 22nd, 2014). They are confident (as they should be) live performers. This is their first time playing in Vancouver, but I bet they’ll be back soon after the impression they made tonight.

I spoke them about their first full-length album BLUE PLANET EYES, which was released this year. Their first EP was released in 2012 and is called SHAKING HANDS. Their second EP came out in 2013: IS THIS HOW YOU FEEL? 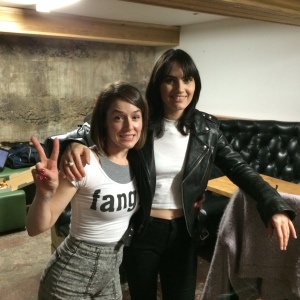 Me (Christina Travis) and ISABELLA MANFREDI (I think she is like a raven-haired DEBBIE HARRY). So beautiful…and down-to-earth!

ISABELLA MANFREDI and THOMAS CHAMPION spoke in-depth about how they were bullied at school. Manfredi and Champion thoughtfully discuss how young people who are being bullied today can make it through the pain and torment that bullying creates.They also talk about their favourite thing about Vancouver so far: FOOD!

MANFREDI recommends musicians DESTINY’S CHILD, BOB DYLAN, THE STONE ROSES, WEEN, CAKE, and BRANDY as being a few examples of music that helped her deal with her schoolmates being cruel to her at school.

The tracks I gravitate towards the most from BLUE PLANET EYES are BLUE PLANET EYES, SOMEBODY’S TALKING, and IS THIS HOW YOU FEEL? (though I embarrassingly called it “Is That How You Feel?” during the interview–I was very nervous!). The band graciously overlooked my error and simply corrected it themselves when they said the title of the song. 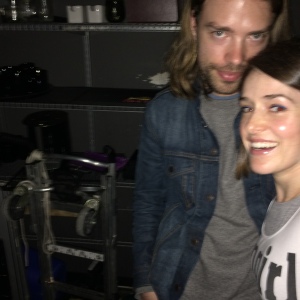 I managed to snag a picture with drummer LUKE DAVISON since he missed out on the group shot.

Another song of theirs that I think is awesome is called BETTER THAN IT EVER COULD BE. It was released as a single and is not on their album or EPs.

THE PREATURES are signed to Mercury Records Australia. ISABELLA MANFREDI won the prestigious Vanda and Young Songwriting Competition (the band writes together, but the award can only go to one individual) in 2013. The prize money was $50,000 and the win was for the song IS THIS HOW YOU FEEL? The band used the money to pursue international release opportunities.

Some other entertaining quotes that MANFREDI gave during the interview are: “Revenge is a good motivator”(so true…the only satisfying revenge is when you work hard so that your life is where you want it to be, and you don’t give a crap about those who ignored you or put you down). Success is the best revenge! When she said “Don’t read fashion magazines!” I thought that was pretty smart as well (Vogue screwed with my head as a child). 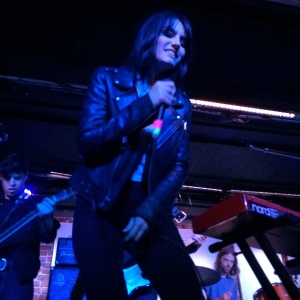 Their live performance was tight! The band clearly has lots of fun performing together and their rapport was contagious, as the crowd was really into the music.

Thanks to THE PREATURES for the wonderful interview and live show!